Lysyl Endopeptidase, originally isolated from the soil bacterium discovered by Masaki, et al. cleaves specifically the peptide bonds at the carboxy-terminal side of Lysine residues and S-aminoethylcysteine residues with a high degree of specificity, making it a valuable tool for protein sequence analysis and for enzymatic synthesis of Lys-X compounds. An added feature of Lysyl Endopeptidase is its ability to retain complete activity after incubation in 4M urea or in 0.1% SDS solution for up to 6 hours at 30 degrees C.
Appearance: Lyophilized form containing ca. 10% Tris-HCl buffer, pH 8.

Activity: Shown on each label

Unit definition: One amidase unit (AU) is the amount of enzyme, which will produce 1 micromole of p-Nitroaniline per minute at 30 degrees C, pH 9.5.
Source: Bacteria
Originally, the source of this product was indicated as “Achromobacter lyticus” based on the physiological and morphological properties of the bacteria. However, we confirmed that the 16SrDNA sequence was highly homologous to that of Lysobacter. 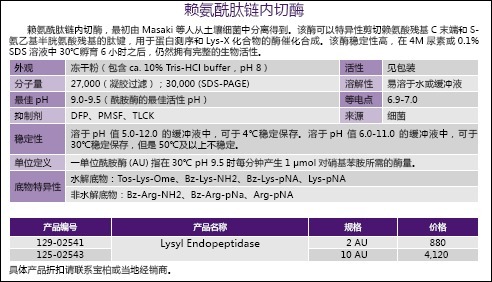